As puzzle game fans may remember a game came out a while back called Q.U.B.E. It was a fun puzzler based around the idea that the player only ever had about 4/5 different kind of blocks to help them solve the puzzle whether it be escaping the room or just moving an item to a desired location to progress.

It was the first puzzler game I picked up not that long after portal and since I’d completed that I was really excited to find another puzzle game where everything isn’t straight forward and it had a wonderful minimalist style (check out my review on Kairo which uses a similar approach).

So as a fan of the original I was elated to find that a piece of DLC had been released for this great game. Original fans beware however as it is different. The original brilliance of Q.U.B.E. focused around the user thinking logically of what needs to happen or what can happen next. This new addition to the game is a puzzle of sorts but in a different way. It focusing instead of logical progression, at the quickest path.

The DLC is made up of 10 new levels each with 3 medals to be gained through pain-staking trial and error. If you want to play the later levels you’ve got to earn your way toward it however as with a total of 30 medals, you need at least 25 just to reach the last one. Players will have to get back to grips with the love-able blocks of old, the blue that when compressed bounces you, the yellow staircase, the red extension and your occasional directional arrows to shift the room. 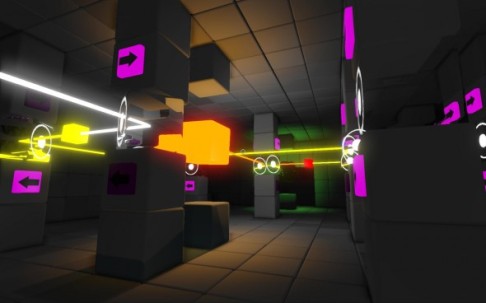 However, its not all the same old mechanics, much like portal 2 introducing different coloured goo, Q.U.B.E. introduces fantastic little medals that can be seized as you as you can see them with the simple click of your mouse. There are a fun selection that are instantly apparent including the blue medal that gives the user low-gravity effects, the yellow that will helpfully shave seconds of the score in order to try get gold, the green medal which makes the player as quick as the flash and a fun purple medal which will reveal tiny secrets that may alter the course for you.
Ultimately you will have to rely heavily on the medallions hidden throughout, you have to if you want to get the gold. And quite smartly, I feel, the developers have put in place items that, due to the original play-style mechanics, blocks you think you’ll need to use, however due to the powers hidden within each medallion, not everything you see is a necessity.
You will be running through one level about 4/5 times before you realise what it is you have to do, in order to get that gold medal. However just because you know how to manipulate the room doesn’t mean you’ll be able to get the gold medal on that 5th run through. The execution of how you manipulate what you have to your benefit will have you pulling out hair (something maybe familiar to the original fans out there).

So it may not be some lovely new levels to get lost in the wonder of how each cube connects to the other, but still a `puzzle` can be vague in meaning and I’m sure many fans will be happy just to be able to be back in the world they once loved. Although admittedly I jumped at the chance to play in some of the large nearly empty rooms with the occasional blue block to bounce you from one side to the other again, I still feel this DLC has a place for a puzzler such as Q.U.B.E. and I’m just happy to be back in a world so familiar. Thank you to Toxic Games & Thank you for reading 😉

Twitch Streamer, Youtuber, Blogger, Marvel-eer, Vaas' Psychologist & Vault Hunter. Truth be told, I'll probably be putting my writing excerpts here, Some Youtube videos that I'm either very proud of or feel people should see. Maybe Updates to or about my Stream on Twitch and any ramblings I have about either the Dredd & Riddick Films as they're badass as all hell
View all posts by willza99 →
This entry was posted in Gaming, Puzzler and tagged against the qlock, cube, Daniel Da Rocha, Dave Hall, DLC, Downloadable content, game, Gold medal, indie, Jonathan Savery, kairo, medals, Puzzle video game, puzzler, Q.U.B.E., qlock, qube, test, time trial, toxic games, video games. Bookmark the permalink.