Remember Me is an awesome linear story set in Neo-Paris in the future where memories have been commoditised and can be shared with everyone. You play Nilin a memory hunter whose hunting her own memories as she’s been `wiped`.
The game starts out with an advertisement for a Sensen, this is the tool that lets people remember every single event in your past and that of others who are willing to share theirs. You wake up in this horribly white and medicinally clean setting that gives it an uneasy vibe already. Your first task; Escape.

The general game has a look & feel of the most recent Deus Ex with Total Recall thrown in especially given the memory angle. So the population of Neo-Paris has become addicted to their Sensens – understandable I think, depressives will wallow and replay the events that put them there and those who are truly happy may become obsessed with chasing previous feelings.
So in this 2084 future you have to find out who you truly are. Once you finish your fist task there is a news flash talking of your epic departure but seeing as you and your character are both being reintroduced to this world its unsettling to see this news flash describe you as a terrorist. Just who is Nilin? Who are you?

In terms of gameplay Remember Me is a mixed bag that comes out surprisingly enjoyable. In terms of fighting you’ll have to deal with hand-to-hand for the entirety of the game which is refreshing given the industry’s simple and easy power-fantasy fascination with guns. Nilin is incredibly acrobatic with her fighting style (imagine maybe Batman’s Arkham Series). Also as you fight an awesome soundtrack kicks in which you may not notice at first but is quite catchy – I was trying to get in fights just to hear the song by the end.
As your memory comes back so does your fighting abilities which ties in nicely to gameplay & story. This takes shape in Nilin remembering different combo lay outs and some fantastic special maneuvers.  One really fun part of the combos Nilin remembers is that you’ll only ever remember 4 (which is sucky at first) however what makes them to the core awesome is that they are customisable. This means that the combo set maybe XXX or XYYXYY but Nilin has `Pressens`, Pressens are different punches/kicks meaning that any combo you remember you can then choreograph which is incredibly refreshing and lets you change up gameplay to how you want it. Remember however that at times it is very hard to pull off the longer combos which does create a level of frustration as you desperately try to land that last punch only to be hit off balance at the last second.

Pressens allow you to choreograph a combo but there’s a little more to it than that. Pressens can take on 4 different types – Damage, Regen, Cooldown & Linked. Damage Pressens allow for heavier damage to foes, Regen Pressens allow for you to regain health that may be lost in combat (maybe not sensible but makes the game compact and forces you to change fighting to what you need), Cooldown Pressens reduce the cooldown time of Nilins specials moves (though even when at 0 you need `Focus` to execute these moves), and finally Link Pressens are merely a multiplier for the previous move so if the previous Pressen was a damage one then it does double damage, if a regen you get double health back etc.

Pressens are unlocked by buying them with PMP (procedural mastering points) which you gain from fighting. You’ll need to unlock Pressens if you want to have several combos as a Pressen can only be used in one combo at a time.
As you run & climb around Neo-Paris you’ll find patches for either Health, or Focus or even that just add some extra information about the world around you. What is cool about these patches is that tiny screens pop up around the world with a picture of where the patch is located and you have to find it based solely on that.
One thing that was slightly annoying however about exploring what little there was to explore (the game is very linear) is that the camera handling is quite old school, so its not always 3rd person, you may round a corner and now you have to deal with an aerial camera, its a minor thing but personally its abit annoying.

Since Remember Me is based heavily around memories, your own and that of others, they added a very cool mechanic that is employed via story and not choice but that is the `Memory Remix`. This is where you go into an enemies mind, watch how they remember a scene then rewind through it altering data to make them think something else happened due to the changes you’ve made – As cool as this mechanic is, it does result in some tragic consequences made all the worse by the fact you HAVE to do it to progress the story, but if you can feel that then it shows some powerful story telling at play, so take with one hand and give with another.

Talking about the writing however, in places it does seem strange. There is admittedly good voice acting as you can feel the exasperation that is displayed in Nilin as she desperately tries to recover `herself` but still some bits seem odd and probably should have been changed for instance you are displayed as a terrorist by the news and those you fight, however they call you Errorists which just felt a little sloppy in terms of writing. 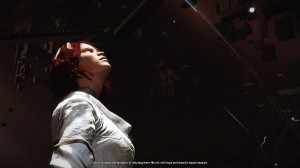 In cutscenes Nilin reflects on what has happened in her mission and deals with the consequences of how that makes her feel. These cutscenes are set in this weird mindscape where there are disjointed blocks that float up to support her feet. It is a great layout and one that had me clamouring to just be able to walk around in it for a minute. To give an example of how it feels imagine being in Assassins Creed Animus but the floor moves like it would in Bastion.

Overall Remember Me despite its limitations is a fantastic game and one I definitely recommend playing. There are several quite philosophical things I took away from it as well. As the game revolves around memory and you have the ability to change minor things and major things in those memories – Did things happen the way you remember them?
If you had your entire memory wiped away but gained it back would you arrive at the same conclusions you did before or would you look back at yourself in distust with how you acted?
However at its heart I think Remember Me is about remembering what is important which is family, friends and that things should be remembered and not forgotten even in the most painful of thoughts.

Remember Me 8/10
Thanks for reading 🙂

1 Response to Remember Me – Who’d Forget?