Primal Carnage is a very simple game at it’s heart, it is simply a game that places Man against Dinosaur in some sort of bloodbath deathmatch to find out who is the most dangerous species and as such is incredibly fun & frustrating.

In Primal Carnage there are the 2 sides fighting in there ever stretching battle of who kicks more arse. On the Human side you have a choice of several classes each with their own gun & perks;
The Commando – A military vet equipped with an Assault Rifle with attached Grenade Launcher, this allows for large explosions and high fire rate to take down those particularly more grueling enemies.
The Scientist – An expert marksman equipped with a Sniper Rifle for those hard to reach targets, a Dart gun which makes the opponent drowsy & therefore harder to control & finally a Cattle prod which is used to jolt any close up Dino’s (this reduces their stamina).
The Pathfinder – A survival expert armed to the teeth with a high powered Shotgun to dispatch close up enemies, Flares to blind the dinosaurs of your true position and finally a Machete to cut deep into the dinosaurs hard flesh and bring them to a final stop.
The Trapper – A BIG game hunter with a large Netgun to immoblise the smaller dinosaurs and hinder the larger, Dual Pistols both of which have a powerful kick to them and to sort out those up close to him a Hunting Knife.
The Pyromaniac – A mad Scotsman armed with the powerful Flamethrower/Chainsaw mix (imagine the Gears of War Lancer but instead of bullets helpful flames sprout forth), this is good for damage over time as you set fire to dinosaurs and see a collection of flames run away, and finally a Grenade just to blow those particularly resilient dinos sky high. 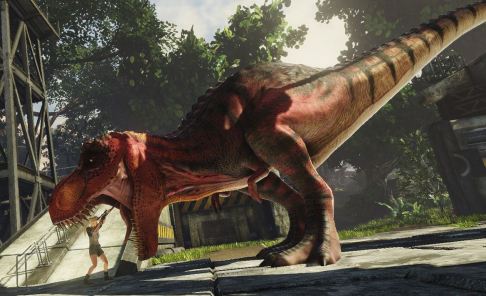 Dinosaurs also have their 5 choices too which we’ll run through now;
The Tyrannosaurus – A huge beast of a creature and king of the dinos, he is able to Bite (by which I mean swallow whole) humans, but due to the size of this goliath he is also able to Trample humans (you try keeping your form with 10 tons of teeth & muscle on top of you) and finally he has the ability to Roar – this riles up nearby allies to give them adrenaline boosts making them even more deadly.
The Nova Raptor – My personal favourite, this is a pack hunter & fast hitter who can easily run in bite and scamper off quick as anything, they have the ability to Bite & Slash a very simple attack style but combined with it’s speed it can prove very deadly, also a wonderful move it has to pick off the lonely targets is Pounce here the Nova leaps onto a foe and pins them to the ground whilst ripping out the opponents throat (gruesome huh?), finally the Nova has a skill called Frenzy here the Nova sacrifices speed for pure strength making them slower but ridiculously powerful – beware!
The Dilophosaurus – An ambusher, this Dino has the benefit of being venemous, its Bite injects poison into the victim, also their Spit has the ability to burn skin and blind the enemy making this Dino very capable of quickly blinding you and then poisoning you, finally it has the ability Roar which allows it to concentrate its internal poison making it able to perform long range Spits for a period of time.
The Pteranodon – Similar to a Pterodactyl in appearance it takes to the sky and watches for luls in the enemies defence it has the ability to Peck, here it’ll swoop down and use its large beak to cause some serious damage, however this is nothing compared to their more popular move Grab which is where it will swoop down upon a victim and fly off with them to drop the human to their death (beware of ledges as these are prime  area’s for hunting), finally it can Screech which will mark humans on the map to other dinosaurs no matter where they are – you’ve just been made a huge target.
The Carnotaurus – A big, mean & unstoppable force of nature the Carnotaurus can Charge which means it will run through everything at full speed destroying anything in its path, it can also Head Swing, here it uses the power of its full body to swing its head and knock people flying and finally it has the ability of Ravenous Roar where it sacrifices its raw damage of Charging for the chance to take out parts of enemies whilst passing them and restoring it’s own strength.

Those are the 2 sides, as well as their own attacks the 2 sides are also differentiated in the things available to them. Both Humans and Dinosaurs run off of health, however Humans have Ammo and both of these traits are replenished at crates (first aid/ammo) however Dinosaurs have energy which allows them to perform some of their attacks e.g. the Nova Raptors Pounce, energy is gained back over time but health is refilled at feeding areas – this is where the Dinosaurs eat from carcasses of other Dinosaurs. All classes no matter if they’re Dino or Human feel very balanced against a couple of the opposing force, e.g. Commandos feel balanced against T-Rexs however Commandos aren’t great against Nova Raptors as they are able to dart about so quickly.
So that is the 2 sides, now lets look more at the other parts of the game.
The game has 2 game styles at the moment Deathmatch (first to 100 kills or most within I think 10 minutes) however due to recent DLC the game also has a game mode called Get To the Choppa this is a new objective based game mode, you might have to capture an area, unjam the radio tower etc. until finally you have to only wait for the helicopter to come save you, the Dinosaurs must stop the Humans completing any objectives and must wait out the clock, however when Humans do complete an objective time is added on making it harder on the Dinosaurs to keep up their defences for as long (This DLC also game with 4 new maps & a new Dinosaur the Spinosaurus).
The base game of Primal Carnage has 5 quite large open environment maps which have perks for both Dinosaurs & Humans – who will use them to their best however is up to you.
On the Human side you play first person however as a Dinosaur you have a third person play style.

Overall Primal Carnage is a great game especially with a friend or 2, games can consist of very large teams each side and with Community driven development and hopefully even more DLC coming Primal Carnage is a great indie multiplayer game worth playing for several hours and to blow off some steam. So go check it out play as a gun-toting Human or ravenous Dinosaur and have fun

Thanks for reading
Primal Carnage 7/10

Twitch Streamer, Youtuber, Blogger, Marvel-eer, Vaas' Psychologist & Vault Hunter. Truth be told, I'll probably be putting my writing excerpts here, Some Youtube videos that I'm either very proud of or feel people should see. Maybe Updates to or about my Stream on Twitch and any ramblings I have about either the Dredd & Riddick Films as they're badass as all hell
View all posts by willza99 →
This entry was posted in Gaming, Multiplayer and tagged assault rifle, carnage, Carnotaurus, cattle prod, classes, commando, dart gun, deathmatch, dilophosaurus, dinosaur, expert marksman, game, gaming, get to the choppa, Grenade Launcher, Human, indie, large explosions, multiplayer, novaraptor, objective based, pathfinder, primal, primal carnage, pteranodon, pterodactyl, pyromaniac, review, scientist, sniper rifle, spinosaurus, t-rex, trapper, tyrannosaurus, versus, videogames, vs. Bookmark the permalink.